Sometime in August, Ancestry intends to remove matches in the 6 to 7.9 cM range from DNA match lists. This will cause problems for African American genealogists since using those matches, even if 50% are false matches, is often the only way for African American genealogists to find possible connections that predate the end of slavery and the 1870 census.  You can preserve these matches by saving a note or adding them to a dot group or by messaging them. Doing so will take time but it is possible. One way is to search by custom centimorgan size and then to search for common ancestors and add a dot group for each. I have been doing this as group CA67.

The same argument can be made for people with documented genealogical ancestry from Native Americans which predates 1870. This range of matches needs to be preserved and continue to be available to anyone who wants to see them.

See this blog post from Roberta Estes, for a more in-depth analysis of this proposed change: Plea to Ancestry – Rethink Match Purge Due to Deleterious Effect on African American Genealogists

Posted by Steven C Perkins at 9:54 PM No comments:

April 25th is National DNA Day and the genetic genealogy companies had or are having sales on DNA tests.

Check the following sites for the details:

Genetic Genealogy:
Whole Genome Sequencing (Mainly for health and science. Not yet useful for genetic genealogy):
I have tested with all of these companies.

Posted by Steven C Perkins at 1:46 PM No comments:

The Gene: An Intimate History weaves together science, history & personal stories for a historical biography of the human genome, while also exploring breakthroughs for diagnosis & treatment of genetic diseases & the complex ethical questions they raise.

This is an adaptation of Siddhartha Mukherjee's book, The Gene: An Intimate History, in 2 two hour long presentations. It is well worth the time for a genetic genealogist to view.

Posted by Steven C Perkins at 5:20 PM No comments:

Posted by Steven C Perkins at 5:28 PM No comments:

Several of the genetic DNA companies are posting reviews of their activities in 2019. Here is one for MyHeritage:

Wrapping Up a Fantastic-2019

MyHeritage is one of the companies I use for my own DNA research. It is the only site where I find information on my Spanish relatives. I encourage anyone with European ancestors to the USA within the past 150 years to test there as well as with the other companies.

Posted by Steven C Perkins at 6:57 AM No comments:

If you want to order a genealogy or health DNA test you should look at the main test sites today.


For the health tests, some USA states and other countries are excluded. Check the web sites if interested.

Ancestry has sites in the UK, Australia, and Canada, as well as the USA.

Posted by Steven C Perkins at 11:53 AM No comments:

The press release from Verogen is here: GEDmatch Partners with Genomics Firm

Gedmatch members should receive an email about the changes.
Posted by Steven C Perkins at 7:28 AM No comments:

The Genetic History of France

The Genetic History of France


Full paper and supplementary info at

This article is a preprint and has not been peer-reviewed

The study of the genetic structure of different countries within Europe has provided significant insights into their demographic history and their actual stratification. Although France occupies a particular location at the end of the European peninsula and at the crossroads of migration routes, few population genetic studies have been conducted so far with genome-wide data. In this study, we analyzed SNP-chip genetic data from 2184 individuals born in France who were enrolled in two independent population cohorts.

Using FineStructure, six different genetic clusters of individuals were found that were very consistent between the two cohorts. These clusters match extremely well the geography and overlap with historical and linguistic divisions of France. By modeling the relationship between genetics and geography using EEMS software, we were able to detect gene flow barriers that are similar in the two cohorts and corresponds to major French rivers or mountains. Estimations of effective population sizes using IBDNe program also revealed very similar patterns in both cohorts with a rapid increase of effective population sizes over the last 150 generations similar to what was observed in other European countries. A marked bottleneck is also consistently seen in the two datasets starting in the fourteenth century when the Black Death raged in Europe.

In conclusion, by performing the first exhaustive study of the genetic structure of France, we fill a gap in the genetic studies in Europe that would be useful to medical geneticists but also historians and archeologists.

Posted by Steven C Perkins at 7:45 AM No comments:

In addition FTDNA has sales on Y DNA and mtDNA tests.

Posted by Steven C Perkins at 4:41 PM No comments: 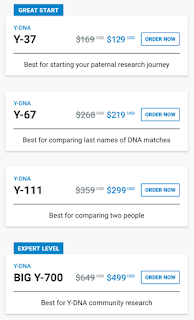 FTDNA Y DNA Sale
Posted by Steven C Perkins at 6:48 AM No comments: