How much faith can you place in the degree of relationship predictions at FTDNA, 23andMe and AncestryDNA?

The horizontal lines going from one side to the other side show the ancestors shared by my parents and also show that my mother's parents had shared ancestry. This is due to cousins marrying cousins and is known as Endogamy. Most people will show it in their own ancestry. It is also called Pedigree Collapse since the number of distinct ancestors at a certain generation will be less if you have more than one line of ancestry from an ancestor or ancestral couple. In my case it is considered to be a mild instance. Indeed, when I run my FTDNA autosomal result file through the program by David Pike to determine Runs of Homozygosity, I have none. 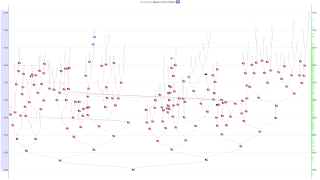 However, when I look at my 1st, 2nd, and 3rd cousins, the intermarriages in my ancestry combined with endogamy within the set of people available for marriage in the area of southeast Kentucky from 1800 to 1940, results in my genetic family tree having an abundance of cousins who are related to me on multiple lines, and often being shown as having a closer degree of relationship that that expected based on traditional relationship charts.

Comparing the relationship predictions at the three main genetic genealogy testing companies, people are predicted to be one-half or one full-step closer at both FTDNA and 23andMe, and one-half to one full step farther away at AncestryDNA. Two of my four tested full 1st cousins exceed the expected 12.5% of DNA sharing: one is 17.9% (we share 6 of 8 great grandparents) and the other is 15.9%. The other two, a brother and sister, are at the expected 12.5%. Due to the Timber algorithm used at AncestryDNA I have a full 2nd cousin who is a predicted 3rd cousin at Ancestry. Her brother is shown as a full 2nd cousin at FTDNA.

FTDNA, through its pedigree system lets you set the exact relationship with your DNA matches. Neither 23andMe nor AncestryDNA do so. We need to be aware of these differences when checking predicted relationship at the different company sites.

I think that in a sense we are at a crossroads. The DNA doesn't lie, but the relationship isn't exactly fully honest. You are first cousins in the traditional sense of relatedness but you are also more than that. The question is do we make our DNA calculations adjust to compensate for relationships or do we revamp how we look at relationships to adjust for our scientific knowledge gains? Family trees lie so we cannot very well adjust our DNA results to better fit the tree. DNA doesn't lie however so I would think at this crossroads we would instead revise our categorical system for denoting relatedness in a way that better reflects our new scientific knowledge. Perhaps our placeholder name for relatedness (uncle, cousin, ggrand et al) should be replaced with 18% related/2 generations/20 years apart (birth years) that could be shortened to 18/2/20 or 18~2~20 so as not to confuse with systems of dates?

I think the reason for AncestryDNA's fudging of the numbers has more to do with subjects we would rather not discuss directly. We use words like endogamy and communities to avoid coming right out and calling it inbreeding . Well, as one who takes family research very seriously (other's families, mine are never to be taken seriously ;) I don't appreciate the lies. Yes, DNA does lie. Today I was given access to a woman's account because she wanted to know who her real grandfather was and was struck in the face with the obvious- her grandparents were very closely related. However, if you look at the numbers, her matches on that Kentucky branch, they were much smaller than they should be for natural relation, let alone inbred. How was she to know or discover this truth about her family? She paid AncestryDNA for the research tool that lied to her. I only recognized it because of my experience analyzing match lists. Cousin marriages were common, we all have at least one or two of those in our ancestry, it's to be expected, this however, covering up an incestuous relationship is not what this woman paid AncestryDNA for.