Posted by Steven C Perkins at 4:17 PM No comments:

Was Susannah, wife of Mareen Duval, a Brassieur?

When Barack Obama was running for President, a Duval descendant posted a line for then Senator Obama from Mareen Duval and his wife Susannah. The poster opined that he believed Susannah was one of the daughters of Benois Brassieur, sometimes shown as Benjamin Brashear, of Maryland. I was interested in that since I have two lines of descent from Benois Brassieur.


I now have a DNA match with an individual at 23andme.  In comparing our pedigrees, we have one possible connection, Mareen Duval and Susannah. While not a definitive match, we could have other Maryland ancestry in common, I do think this does support the identification of Susannah as a daughter or other close relative of Benois Brassieur.

Posted by Steven C Perkins at 6:04 AM No comments:

NASA's Astronomy Picture of the Day is a short video on DNA:

scccp has shared a video with you on YouTube:
Molecular Visualizations of DNA —

The incredible mechanical form of Dna and its Friends. made by Walter Eliza Hall Institute of Medical Research. Various DNA molecular visualizations derived from x-ray crystallography and other data sets, and imbued with dynamic movement that suggest brownian motion.


Posted by Steven C Perkins at 8:50 PM No comments:

Full Identical by Descent match with a 3rd Cousin

Normally, one expects to find either Half Identical by Descent (HIBD) or Full Identical by Descent (FIBD) matches with your genetic relatives. Generally only close relatives through double 1st cousins are expected to have FIBD matches. I have a FIBD with one of my multiple 3rd cousins. The Family Inheritance chart from 23andMe is below: 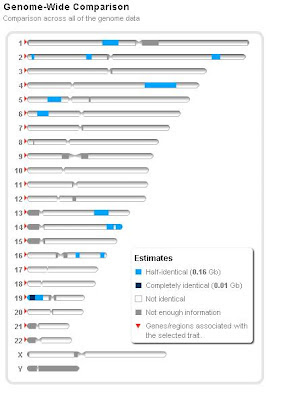 The FIBD segment is on Chromosome 19. I do not have an FIBD match at that location with my multiple 1st cousin who has a similar relationship to the 3rd cousin.

I am interested in learning of any other FIBD matches with cousins beyond the 1st cousin level.

Posted by Steven C Perkins at 8:07 PM No comments:

I received my invitation to the AncestryDNA test today, two and one half months after receiving notice that I was on the list for the invitation.  Hopefully I'll have results in another month.

This will be the sixth autosomal DNA test I have had. I have already tested with the Coriell Institute, Family Tree DNA, 23andMe, and DeCode Genetics. I was also tested by Sorenson Molecular Genealogy Foundation but the autosomal results were never released.

I do not expect to have any new ethnicity results, but I do expect to have many more verifiable genealogical connections tied to the pedigree trees at Ancestry.com.

So far I have similar results from Family Finder at FTDNA and Relative Finder at 23andMe with 15 verified connections in each where I am sharing genomes with around 400 people in each database.

Posted by Steven C Perkins at 12:58 PM No comments: