If you have taken the Family Finder test at FTDNA, one of your result sets has been Population Finder. This has been renamed myOrigins. It is found as a link on your Personal Page (MyFTDNA) at FTDNA. I looked at my FTDNA myOrigins results and they are in line with what I have at 23andMe and at AncestryDNA.

So now all three show:

The British Isles;
France and the Low Countries;
Scandinavia;
Portugal and Spain over to Greece and the western Balkans. 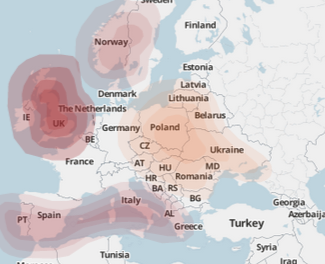 Missing is Finnish and Yakut.

I believe Finnish should be there since I'm 90% sure of my Finnish ancestor in New Sweden. The Yakut, maybe not, though it could be Native American.

In 23andMe Counties of Ancestry I match people with all grandparents from Greece, Slovenia, Croatia, Serbia and Armenia, as well as the more western European countries.

For me, myOrigins seems to work.
Posted by Steven C Perkins at 10:17 PM